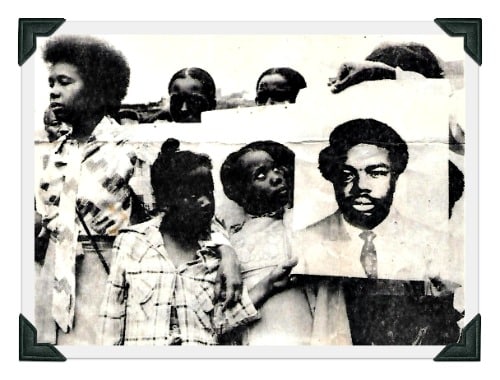 Arthur’s Children Display His Photo After His Death

Arthur was a devoted husband, loving and playful father, entrepreneur, philanthropist, and highly respected community leader in the Crown Heights, New York area. Arthur’s promising life was cut short in 1978 after an interaction with police that led to him being handcuffed and ultimately placed into the deadly ‘choke-hold’ that killed him. This tactical maneuver originated in martial arts and has since been outlawed by the state of New York and parts of California. The backlash from the community around the circumstances of his death was enormous. See the following articles covering these events. (You will leave this site)

9 Police Officers Silent on Death Of Businessman in Crown Heights

Brooklyn Businessman Strangled In a Struggle With Police Officers

The Right to Resist:How Will YOU Fight Police Brutality?

What inspired ‘Do the Right Thing’ character Radio Raheem, and why he’s still relevant today

A father was choked to death by the NYPD 42 years ago. His family has never recovered

Daughter of man killed by police 42 years ago: ‘I was Gianna Floyd’

Arthur Miller Jr. constantly dedicated his spare time to serving others. Entrepreneurship afforded him the time and resources to do what was most important: Give Back. Other men in the community maintained gainful employment with his construction business. During the summer months when school was out of session he and his wife offered lunch to children while their parents worked, some may have gone hungry without their help. Arthur arranged and helped cover the costs of field trips that allowed neighborhood children to explore places they otherwise couldn’t afford like the Poconos Mountains and Hershey Park. Arthur’s generous spirit, loving heart, and community focus live on through the efforts of the foundation, and the tagline “A Daughter Never Forgets” ensures the tremendous loss his family suffered will not be forgotten.

Our vision is to improve and make positive changes in Broward, Miami-Dade, Palm Beach, Florida, New York, and communities throughout America in which we operate using outreach, education, and mentorship. To empower people and to bring them together instead of dividing them; to assist with eradicating injustices and racism through positive forward-thinking and collaboration. To be a model of best practices, to complement other organizations’ program services and promote change through policy and community development. To join us in our mission please Contact Us for more information

To be present through the storm of life-changing events, and remain in the aftermath of it all; to assist individuals and families with accessing community supports and resources, counseling, education, and mentorship; to be a catalyst of encouragement, hope, and empowerment.